BANDIT'S '77 TRANS AM LIVES ON

In my new novel, KEY TO LOVE, the main character, Lucas Fisher, drives a '77 Trans Am, like the one in "Smokey and the Bandit.” He has returned to the Scranton, PA, area to set up a car restoration business and adopt his little four-year-old, orphaned nephew. He reconnects with architect Elise Springer who helps him in his quest to find his brother's murderer and to gain custody of the child.

While I was working on the production of the novel, I met Conrad Segelbacher through the Bandit Trans Am Club on Facebook. He owns a mighty fine looking '77 Trans Am as you can see by the pictures. I want to thank him for his help. I asked him some questions about his very striking car.

Can you tell me a little about yourself?

I’m a guy who fell immediately in love with the Bandit Trans Am, having been a car enthusiast since I was in diapers. I had an older brother who had a GTO and I was his tool go-getter and helper.

How much research did you do to assure the car was restored as authentic as possible?
When I shopped for my car I didn’t want any custom work, but rather a model the way it was intended the day it rolled off the assembly line. No changed-out rims or steering wheel, extra body flares, for example.

Where in the United States did you find your Trans Am?
I shopped nationwide for two full years, waiting patiently, when it appeared 50 miles away. I raced there and put down a payment. It was love at first sight! This was a once in a lifetime purchase. She was mine!

Did you do any restoration? Do you show it?
Since I work so much, I couldn’t have a project car. The car needed to be turn key. I don’t go to shows, but if I did, I’d be afraid of all the fingerprints! I only show her off when I drive. I do have a chart I show people and can talk about her all day. 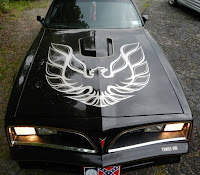 What advice would you give to those who are interested in restoring an older car?
Stay determined and stay the course! Stay the way Pontiac intended the car to be.

Anything else you might want to add?
My dad had so much influence on me in the three weeks before he passed away. I was only thirteen years old, and it was my sole quest in life to get a ’77 Bandit car. He told me in his heavy German accent to save my pennies, and 30 years later, I got my baby!


What would you say to your dad if you could?
Thank you for being my inspiration! Love and miss you. I know you’re in the passenger seat when I’m cruising. Hey, Dad, maybe I’ll let you drive one day. . .but then, maybe not. It may look strange on the highway!

Posted by Judy Ann Davis at 11:42 PM 3 comments: Links to this post