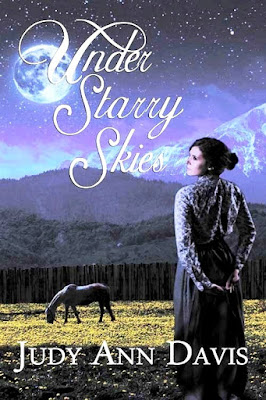 Book Excerpt:
Tye rolled up into a crouch, reset his hat, and faced Maria.
“Listen, I have an idea. I’m going to take you farther back into the forest, hide you, and then I’m going down the mountain a bit in search of my horse.”
“You’re going to abandon me, Tydall Ashmore?"
He winced, his expression was almost apologetic. “No, I’m going to leave you for a few minutes. I promise I’ll return.”
“No, take me with you. Please.” Icy fear glistened in her eyes.
He raised his hand and caressed the side of her face with his knuckles. “You have to trust me, Maria, if we’re going to get back down this mountain alive.”
He gestured toward the dense woods behind them. “Come, let me find a place farther from the path where it’s safe and secure. I promise I’ll be back to get you.”
Minutes later, when he turned to leave, she grabbed him by his upper arm. “Wait,” she said, her voice faltering, her gaze fearful. “Please be careful.”
He felt the electricity of her touch, and for a moment they stared at each other, unable to tear their attention away.
He left her then on the perimeter of the small clearing, but not before softly touching his lips above her eyebrow and whispering near her ear, “Trust me. You have to trust me, Maria. I’ll come back for you.”

Hired as the town’s school teacher, Maria O’Donnell and her sister Abigail arrive in the Colorado Territory in 1875, only to find the uncle they were to stay with has been murdered.

Rancher Tye Ashmore is content with life until he meets quiet and beautiful Maria. He falls in love at first sight, but her reluctance to jeopardize her teaching position by accepting his marriage proposal only makes him more determined to make her part of his life.

When their lives are threatened by gunshots and a gunnysack of dangerous wildlife, Tye believes he is the target of an unknown enemy. Not until Maria receives written threats urging her to leave does she realize she might be the target instead of the handsome rancher.

With the help of Tye, Abigail, and a wily Indian called Two Bears, Maria works to uncover her uncle’s killer and put aside her fears. But will she discover happiness and true love under Colorado’s starry skies?