KEY TO LOVE, a mystery and romance, currently only on amazon.com Kindle and coming to print in October, has the main character, Lucas Fisher, owning a car restoration business. Lucas drives a ’77 Trans Am, replica of “The Bandit” car in “Smokey and the Bandit.”

Conrad Segelbacher of New York State owns a terrific-looking ’77 (Bandit) Trans Am, and although we weren’t successful in getting a picture of his car on my book’s cover, it was delightful to make contact with him and the Bandit Trans Am Club on Facebook that has over 1,060 members: https://www.facebook.com/groups/32710064318/ 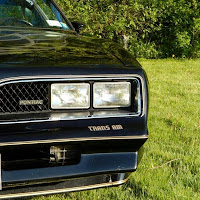 Conrad was in love with the movie, “Smokey and the Bandit,” since he was thirteen years old. When he told his father he wanted a Bandit car, his father told him in a heavy German accent to “save your pennies.” Unfortunately, his dad died three weeks later and was unable to know that 33 years later, Conrad had saved enough. He searched two years all over the USA, and found the Bandit car. Even though it didn't arrive via a tractor trailer as in the movie, it was exciting for him to drive it home. And yes, every time he turns the key in the ignition of this gleaming jet black machine, he thinks about his parents.

The photos here are those of Conrad's Trans Am. Notice the gleaming finish that reflects everything around it in the sunlight.

I would personally like to thank Conrad, George Holt,  and all the folks of the Bandit Trans Am Club. While I write on, I wish everyone in the club my best wishes as they keep the legend alive and ride on! 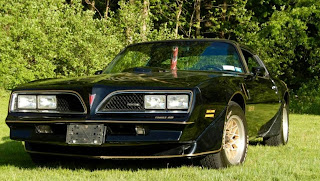 "Love is the master key that opens the gates of happiness," so says Oliver Wendell Holmes. . . and Anton Springer, father of Elise Springer, in my newly released novel, KEY TO LOVE, available early on KDP Select in Kindle format on amazon.com: http://www.amazon.com/Key-to-Love-ebook/dp/B00DNO9S8K

KEY TO LOVE is a mystery and romance with plenty of snappy, humorous dialogue. You’ll laugh, you’ll cry, and you’ll race against the clock with Elise as she tries to find the person who murdered Lucas’s brother, a state trooper.

The cast of characters include the heroine, Elise Springer, an architect; hero Lucas Fisher who owns a car restoration garage and drives a restored Smokey and the Bandit Trans Am; and Lucas’s little orphaned nephew, Todd, who’s addicted to animal crackers and The Fox and the Hound storybook. Secondary characters include Elise’s grumpy, but astute father, her wise-cracking brother, Fritz, and a no-nonsense director of Child and Youth Services, Twila Pedmo. 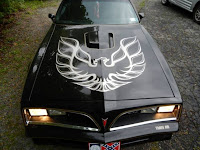 When architect Elise Springer's father is injured, she immediately leaves San Francisco to care for him. The last person she expects to encounter in her Pennsylvania hometown is her childhood friend, Lucas Fisher.

Lucas is investigating his brother's mysterious death, and Elise can't resist lending a hand. Lucas longs for the close family ties he never had. He's back in Scranton to set up a classic car restoration business and build a future. The torch he carries for Elise burns brighter than ever, but before he can declare his love, he must obtain the legal rights to adopt his nephew--and prove his brother's death was no accident.

As they unearth clues to find the murderer and a missing stash of money, Elise faces a dilemma. Is her career on the West Coast the key to her happiness, or is it an animal-cracker-eating four-year-old and his handsome uncle instead?

KEY TO LOVE will be released in print format in October of this year.
Visit my author page for more information: www.judyanndavis.com

Posted by Judy Ann Davis at 3:57 PM No comments: