July is the month to enjoy special summer treats like watermelon, key lime and peach pie, blueberry cobbler, strawberry shortcake—and ice cream, my favorite of all! Whether it’s a waffle cone, sugar cone or wafer cone, as long as it’s filled with ice cream, I’m in summer dessert heaven.

The first ice cream cone was produced in 1896 by Italo Marchiony, who emigrated from Italy in the late 1800s and invented his ice cream cone in New York City. He was granted a patent in December 1903, although July 23, 1904, is credited as the day and year the cone was invented.
A similar creation was independently introduced in 1904 at St. Louis World's Fair by Ernest A. Hamwi, a Syrian concessionaire. Hamwi was selling a crisp, waffle-like pastry called zalabis, in a booth right next to an ice cream vendor. When the ice cream vendor ran out of dishes, Hamwi saw an easy solution to the problem. He rolled one of his wafer-like waffles in the shape of a cone, or cornucopia, and gave it to the ice cream vendor. The cone cooled in a few seconds. The ice cream vendor loaded it with ice cream. The customers were happy. And the idea of an edible cone came into existence as part of our staple desserts in America.
Soon thereafter, ice cream cone businesses and factories sprung up creating all types of cones from the rolled cone which was  baked as a waffle to the batter-made molded ones.

What followed next were the many, many flavors of ice cream created to fill those wonderful, walk-around, funnel-like inventions. So when you buy or fill a cone with your favorite ice cream this summer, you’re eating a piece of history dating back over a century ago.

I have to admit, vanilla is still my favorite flavor of ice cream, followed by butter pecan—heaped in a sugar waffle cone. When you’re trying to beat the summer heat, do you have a favorite flavor and a special kind of cone you like the best?

Posted by Judy Ann Davis at 4:55 PM No comments:

I pleased to have Pamela S. Thibodeaux on my blog with her book, “Tempered Hearts.” Pamela hails from Southwest Louisiana and writes “Inspirational with an Edge” fiction and creative nonfiction. Her favorite thing to do to relax is read. 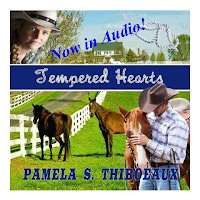 I asked her who introduced her to the love of reading and she told me her mother and oldest brother were avid readers. “Both influenced me, but mama’s passion bore the most effect on my becoming a reader for life,” she said. When asked to list three adjectives to describe herself, she lists: strong, sensitive, and kind.

Here is the blurb from “Tempered Hearts”
Rancher Craig Harris and veterinarian Tamera Collins clash from the moment they meet.  Innocence is pitted against arrogance as tempers rise and passions ignite to form a love as pure as the finest gold, fresh from the crucible and as strong as steel.  Thrown together amid tragedy and unsated passion, Tamera and Craig share a strong attraction that neither accepts as the first stages of love.  Torn between desire and dislike, they must make peace with their pasts and God in order to open up to the love blossoming between them.  It is a love that nothing can destroy when they come to understand that only when hearts are tempered, minds are opened and wills are softened can man discern the will of God for his life.

Award-winning author, Pamela S. Thibodeaux is the Co-Founder and a lifetime member of Bayou Writers Group in Lake Charles, Louisiana. Multi-published in romantic fiction as well as creative non-fiction, her writing has been tagged as, “Inspirational with an Edge!” ™ and reviewed as “steamier and grittier than the typical Christian novel without decreasing the message.” Sign up to receive Pam’s newsletter and get a FREE short story!

Pamela is giving away one free
audio copy from the list of  comments.

The second Sunday in July is designated “barn day,” when the importance of barns in the farming communities in the United States is observed. Throughout our lands, there are many different styles of barns, built and designed to reflect the type of farming that occurred there.
In Northeastern Pennsylvania, where I grew up, our dairy barn was a bank barn which meant it was built into a bank allowing for easy ground access to both the upper and lower floors. The upper floors accommodated haylofts where first loose hay and later baled hay were stored for the cattle housed on the lower floor.

Most barns in Northeastern Pennsylvania were constructed of hemlock, a very hardy wood which seasons to a light gray color. The eastern hemlock is the state tree of Pennsylvania, and large plentiful stands existed in the 1800s.

By design, our barn was fashioned after a style called the Dutch Barn with its hip or gambrel roof which had two symmetrical slopes on two sides with the lower slope steeper than the upper one. However, the barn itself was more rectangular, like the English and German barns, and the broad expansive side had wide doors on tracks that opened and allowed for wagons to enter directly into hay loft, making unloading the hay easier.

How did they get the hay into the loft or mow? A long rail or track ran along the inside length of the roof, from peak to peak, and accommodated a double harpoon hay fork, pulleys, and trip rope. Once the fork, with its two giant tines, was secured into a bundle of hay, a horse—and later a tractor—pulled the stack of hay up and onto the track. After delivering it to the proper location, a yank on an attached rope would trip the hay fork to release its load. I often worked the mow. Using a pitch fork, I dragged layers of hay to the far corner and edges of the loft to even it out.

Because we found newspapers from the Civil War, used as insulation in the attic, we suspected the house, and probably the barn as well, were built before 1861. However, we also knew the Irish Potato famine of 1845-49 brought many skilled Irish immigrants looking for work when they arrived in the United States. It was said they went from farm to farm, seeking shelter and food—and in return, cleared stone from fields and built the stonewalls in Northeastern Pennsylvania. We have many of these sturdy walls still standing on the family property today.

So what do you do on Barn Day? Why not take a ride in the country and go looking for old barns? They are a disappearing structure on our rural landscape as the farming industry has slowly faded over the years and the barns have gone to disrepair.

Posted by Judy Ann Davis at 9:01 PM No comments:

Along the West Branch of the Susquehanna River

There is something enticing about water. People flock to it, whether it's a river, a lake or the ocean. In Central Pennsylvania, the small town of Clearfield lies along the west banks of the Susquehanna River. Flowing 228 miles from Cherry Tree to Sunbury, the West Branch forms the lifeblood linking what is now known as the Lumber Heritage region. 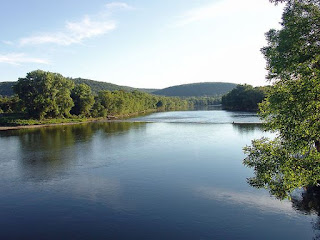 It is also the setting for my latest book, "Willie, My Love."  My heroine, Wilhelmina Wydcliffe, and her father own a large logging operation in the area in the 1800s. And the hero? Well, of course, Jonathan Wain is a ship captain who owns the clipper ships in the Chesapeake Bay and who sells the Pennsylvania lumber.

Throughout the 19th and early 20th centuries, virgin timber—among it the celebrated great white pine—was harvested to supply to supply lumber for shipbuilding, construction and coal mine props. Much of this lumber was rafted down the West Branch to markets on or near the Chesapeake Bay. Today, the West Branch flows through a northern hardwood forest of oak, cherry, maple and remnants of white pine and hemlock forests of early settlers' times.

The West Branch of the Susquehanna is actually part of the main “North Branch” of Susquehanna River which is the longest river on the East Coast of the United States. At 444 miles long, it drains into the Atlantic Ocean via the Chesapeake Bay and is the 16th largest river as well. The headwaters start in Cooperstown, New York, and join the “West Branch” near Northumberland in Central Pennsylvania.

Before European conquest, the Susquehannock, an Iroquoian tribe lived along the river and gave the Susquehanna its name. In the 17th century, it was inhabited largely by the Lenape. In the 18th century, William Penn, the founder of the Pennsylvania Colony, negotiated with the Lenape to allow white settlements in the colony between the Delaware River and the Susquehanna. 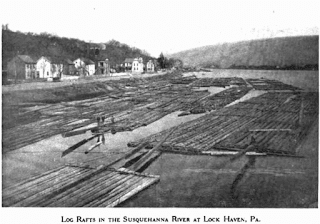 Local legend claims that the name of the river comes from an Indian phrase meaning "mile wide, foot deep," referring to the Susquehanna's unusual dimensions, but while the word is Algonquian, it simply means "muddy current" or "winding current". Additionally, hanna, is an Algonquin word that means stream or river, and that Susquehanna is up for interpretation as meaning long reach river to long crooked river. It has also been said that the Susquehanna River was also called “Oyster River” by the Lenape because of the numerous oyster beds at the mouth of the river where historians found mounds of oyster shells.

Although there are mysteries surrounding the river and how its name originated, there is one constant. The Susquehanna is the main life-sustaining river of the state of Pennsylvania. Its waters allowed settlements to spring up along its banks and businesses and farms to survive and thrive—and Pennsylvania to become the 9th most densely populated of our fifty states.
Posted by Judy Ann Davis at 10:31 AM No comments: