For me, feeding the birds is a natural stress-free and entertaining activity. There is nothing more exciting then to see a new species of bird appear at your feeder or to see the colorful finches, cardinals, and blue jays mingle with the common song sparrow that sings a cheery tune in the bushes outside the windows.

It is estimated that one-third of the U.S. adult population feeds wild birds in their backyards. For many, it’s a fun activity that can be enjoyed by children and adults alike and encourages bird watching as a hobby. It also allows wild birds a supplement to their natural diet of weed seeds and insects while offering entertainment and relaxation for the human population.

In 1994, Congressman John Porter, of  Illinois, introduced a resolution to recognize February as National Bird Feeding Month. This is the time, in cold climates, when many birds need the most help with their food supplies as well as a place to find available water.

For young children, bird feeding and watching, is an excellent educational experience. They can identify the different species of birds, use a field guide, learn the feeding and living habits of birds, do research projects and reports, and most of all—have a pleasant interaction with adults.  With the use of a digital camera, they can chronicle the various types of birds with pictures, learning the skill of photography as well.


If you’ve not tried bird feeding as a hobby, give it a whirl. It’s like having your own wildlife reality show where the characters change every few minutes and their antics and songs keep you entertained.

Posted by Judy Ann Davis at 12:30 PM No comments: Links to this post 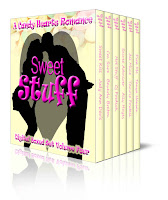 SWEET KISS is now bundled in a Candy Heart's set called "Sweet Stuff" for Valentine's Day,  along with some other great short stories. You can find the set on Amazon for $5.99 at: https://www.amazon.com/Sweet-Stuff-Candy-Hearts-Boxed-ebook/dp/B079HLKGYC/


SWEET KISS is also available until Valentine's Day for $0.99.
https://www.amazon.com/Sweet-Kiss-Candy-Hearts-Romance-ebook/dp/B018L2U3MS/

Hands gripping the wheel, Tappe cleared his throat and hesitated. When he spoke, his voice was calm, but calculated. “I don’t know how to say this, Kate. Not without offending you. I was sorry to see you were getting married even though I hope, to all the heavens above, you’ll to be happy. Whoever he is, he’s one damn lucky guy. What’s his name?” He looked over at her, and his gaze hardened with disdain. “But I swear, if the SOB ever breaks your heart, remember I’m still here to pick up the—”
“Stop, just stop!” Kate sliced the air with both hands, then brought them to her forehead and pushed her bangs out of her eyes. “I’ve been trying to tell you ever since the day you tried to demolish the drainpipe with that wrench—I’m not engaged to anyone.” She shot him a withering glance.
His eyebrows rose in amazement. “What did you say?”
“I said I’m not engaged.”
“What about the ring?”
“It’s an inheritance from my Aunt Fay.”
“I don’t understand.”
“What’s not to understand?”
“Whoa, you’re serious?”
“Why would I lie?” They were trading questions and answers like they were on a television game show.
“Say it again,” he urged.
“I. Am. Not. Engaged.”
Seconds later, the truck swerved, then slid to a stop at the side of the road. Before she could collect her thoughts and sputter another word, Tappe’s strong arms tugged her across the seat toward him. His lips descended on hers while his arms gathered her in an embrace. The sweet taste of strawberries on his lips sent shivers of desire racing through her. He pulled back, cupping her face in his hands. “Those last four words were the best I’ve heard since I arrived in Little Heron Shores,” he whispered against her lips.
“I’m glad. We’re crushing the lobster rolls,” she said.


HERE ARE THE SIX BOOKS IN THE SET 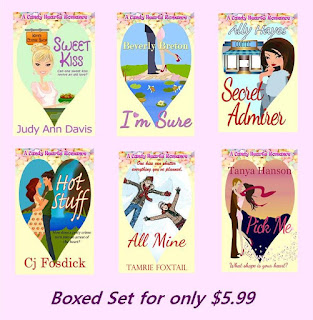 Groundhogs Day and an all-important celebration in Punxsutawney, Pennsylvania, as well as around the United States. It’s based on the idea of a groundhog, also called a woodchuck, emerging from its hibernation to predict the weather. If the groundhog sees its shadow and returns to its burrow, there will be six more weeks of winter. But, if the animal does not see its shadow, then spring is right around the corner.

In Pennsylvania, where the annual ceremony is held, the natives and townfolk know the famous furry fellow as “Punxsutawney Phil.” And Phil doesn’t live in the ceremonial stump on Gobler’s Knob where he emerges, but in Phil’s Burrow which is an indoor structure next to the library resembling a natural habitat where he dines on corn on the cob, carrots, celery, lettuce and kale, and granola bars. The latter is used to keep his ever-growing front teeth from getting too long.

Also known as the whistle pig, the groundhog is actually a member of the squirrel family. They are slow, lumbering runners and when they sense danger head for their dens which are tunnels in the ground. They are covered with two coats of fur: a dense grey undercoat and a longer coat of banded guard hairs giving them their distinctive "frosted" appearance. The young groundhogs are often called chucklings. 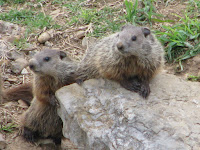 The primary predators of groundhogs are hawks, foxes, coyotes, bobcats, dogs, bears, eagles, and humans. And, let’s not forget the automobile. Although groundhogs rarely come in contact with humans, they are capable of are capable of carrying fleas, ticks and rabies.

Groundhogs are among the few mammals that enter into true hibernation starting the end of October and until late February. They are strict herbivores. In the wild, they eat a variety of vegetables including soybeans, beans, peas, carrot tops, alfalfa and grasses. They prefer to burrow nearby where they feed—in fields, pastures, along fences, roadsides, and near building foundations, and bases of trees. For the farmers and gardeners, groundhogs are a nuisance and the holes they make in fields often result in damage to equipment. Foundations to building are often compromised; and these critters have been known to cause electrical outages from gnawing on underground wires.

But despite his ability to be a nuisance, every year since 1887, thousands of people gather in Punxsutawney on February 2nd to await the prediction of spring. He is so popular that in 1995, Phil flew to Chicago for a guest appearance on The Oprah Winfrey Show, which aired on Groundhog Day of that year.

So let’s have some fun. Will it be an early spring…or six more weeks of winter? Only Phil…and maybe the weatherman, knows for sure.

Posted by Judy Ann Davis at 12:30 AM No comments: Links to this post