If you are of Ukraine or Polish ancestry, Easter is the time you marvel at the skills needed to make pysanky eggs. Pysanky –from “pysat,” means “to write,” and these are intricately decorated raw eggs, but now are often wooden ones or eggs with the content (yolk and white portion) removed.

The art of wax-resist egg decoration in Slavic cultures probably dates back to the pre-Christian era. Fragments of colored shells with wax-resist decoration on them were unearthed during the archaeological excavations in Ostrówek, Poland, where remnants of a Slavic settlement from the early Piast Era were found.

In modern times, the art of the pysanka was carried abroad by Ukrainian emigrants to North and South America, where the custom took hold. Ironically, it was banished in the Ukraine by the Soviet regime where it was deemed a religious practice, and it was nearly forgotten. Since Ukrainian Independence in 1991, there has been a rebirth of this folk art in its homeland and a renewal of interest in the preservation of traditional designs as well as research into its symbolism and history.

Today, in the United States, pysanky egg decoration has been transformed into an art form that only those with patience, perseverance, and attention to detail are able to perform.

The artist uses a soft wax, like beeswax, and many colors of dye to create these incredible designs resembling batik. The designs are “written” in hot wax with a pinhead or special stylus called a pysachok or kistka which has a small funnel attached to hold a small amount of liquid wax. 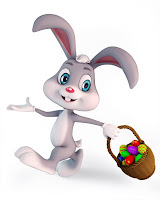 The artist starts with a white egg, moving through the color chart from light hues like yellow to darker ones, adding the waxed design, layer upon layer, until finally the egg is often dipped in black. Then, it’s held close to a candle or heat source. The wax is rubbed off to reveal the entire design.

By tradition, Pysanky eggs, which are decorated with symbols of Easter, life and prosperity, were included in the traditional Polish Easter Basket along with butter to symbolize the good will of Christ, babka (bread) for the bread of life, and kielbasa which symbolizes God’s favor and generosity. Other foods like ham, smoked bacon, salt, and cheese were included. The basket was lined in a white linen cloth that could be drawn over the top of the basket. It was then taken to church to be blessed. A candle was tucked inside the basket to represent Christ as the Light of the World. Sprigs of greens were added to represent spring, new life, and the Resurrection.

With Easter around the corner, I wish everyone a Happy Easter and a basket filled with your favorite goodies. May your life ahead be as colorful and bright as the delightful pysanky eggs!

St. Patrick’s Day in the United States is the only day when everyone is Irish. It’s a time for wearing green, reveling with friends, drinking beer—often also green—eating Irish food, watching parades, and generally celebrating Irish culture, heritage and traditions.


St. Patrick’s Day was officially declared a Christian feast day in the early seventeenth century in honor of St. Patrick. It was observed by many (Christian) religions because it commemorates the arrival of Christianity in Ireland. 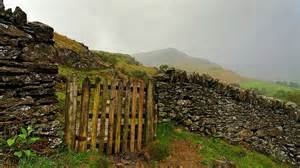 Patrick was born in Roman Britain in the fourth century to wealthy Roman Christian aristocrats. His father was a deacon and his grandfather was a priest. At the age of sixteen, he was kidnapped by Irish raiders and taken as a slave to Gaelic Ireland where he spent six years there working as a shepherd.

After making his way back home by escaping to Gaul, now France, Patrick became a priest and studied for fifteen years before returning to Ireland in 432. According to legend, St. Patrick used the three-leaved shamrock to explain the Holy Trinity to Irish pagans.

The first organized observance of St. Patrick’s Day in the British colonies was in 1737 when the Charitable Irish Society of Boston gathered to honor their motherland. During the American Revolution, George Washington, realizing his troops had a morale problem and in acknowledgment of the valiant Irish volunteers who served in his army, issued an order declaring the 17th of March to be a holiday for the troops in honor of St. Patrick’s Day.

Throughout the years and throughout the United States, cities with Irish populations continued to celebrate the special occasion with parades and festivities. Even the White House celebrated St. Patrick’s Day, starting with President Harry Truman.
So to everyone, whether you are Irish or wannabe Irish, I lift my glass of ale and wish you this Irish blessing:
These things, I warmly wish for you
Someone to love, some work to do,
A bit of o' sun, a bit o' cheer.
And a guardian angel always near.

Posted by Judy Ann Davis at 8:52 AM No comments: Links to this post

There's always time for a bowl 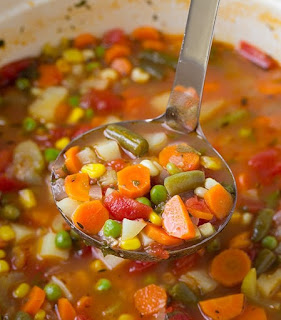 of soup. It's a healthy lunch item when paired with your favorite sandwich--and a warm addition to any dinner on a cold night.

1. Brown onion and meat in 2 tablespoons of oil.
Remove from pan and drain.
2. Place meat and onions and vegetables in slow cooker.
3. Drain the onion soup, saving the broth.
4. Add onion broth, vegetable broth, and beef broth to slow
cooker along with the spaghetti sauce.
Cook on low for 6 hours. Add water, if necessary.

NOTE:  Green beans can be added the last two hours to
avoid being too soft.

Posted by Judy Ann Davis at 12:52 AM No comments: Links to this post