Award-winning finalist in the American Fiction Awards for Historical Mystery/Suspense. 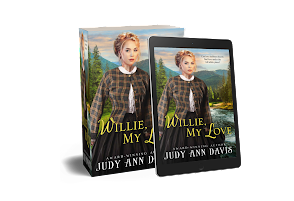 The last thing Jonathan Wain wants to do is ride miles through Pennsylvania's wilderness to help his father's logging partner in the small settlement of Clearfield. His family owns clipper ships in the Chesapeake Bay that carry the coveted logs to the markets each spring, and they can't afford a loss.

The last thing Wilhelmina Wydcliffe wants is a handsome sea captain from Maryland meddling in her father's logging operations under attack by unknown enemies. A feisty tomboy and better known as Willie to her crews, she has a dream to be the largest logging operator east of the Mississippi River.

When both Willie's and Jonathan's lives are threatened, they are forced to work together to find their enemies before both of their companies are in shambles. But as their attraction to each other escalates, can they set aside their differences, unearth the truth and troublemakers, and discover contentment in each other's arms?

Jonathan’s jaw dropped unable to hide his astonishment. All day the picture of the hoyden had plagued his thoughts. He finally vowed to himself he would make it a point to discover who she was before he left the area, hoping for a chance to see her, hoping that she wasn't spoken for. And now, like a careless breeze, she had swept in. Elizabeth Wilhelmina Wydcliffe was Willie from their encounter in the forest.

“I'm sorry, Papa. It won't happen again, I promise.” She turned from her father toward Raven and Jonathan. When she spied him, her mouth flew open, and then clamped shut like a trap door. Suppressed anger flitted across her face. She glared at him.

He returned her stare and felt a ripple of excitement in his chest. So the spunky little enchantress, the golden spitfire, now standing just yards from him was Wydcliffe's youngest daughter. Stunningly beautiful in a powder blue dress, she appeared almost angelic. An errant thought hit him like a ton of bricks. This sharp-tongued, little hoyden was by far no angel, but rather his business partner instead.

Big buzzard. Oaf. He recalled her string of warm compliments. His brow arched in ironic amusement as he offered her the first move in an obviously tricky situation. To her credit, she recovered with grace and charm. Squaring her shoulders, she crossed the distance, placed her hand in his, and shook it.

“Why, Mr. Wain, how delightful, at long last, to be able to meet you.”

“Big buzzard, at your service,” he whispered, still holding her hand. Aloud, he said, “Yes, what a delight. This may sound outlandish, but you remind me of someone I've recently met.”

She yanked her hand away. “Highly doubtful.” Lowering her voice, she whispered, “Let’s not overdo the theatrics. You realize you weren’t expected for two days?”

“I have an excellent horse.”

“Yes, you do. You must be sure to give him an extra ration of oats as a reward for your swift arrival. We are so blessed.”