Gift Buying for the Grandson this Christmas

Black Friday is over, thank goodness, and now the holiday shopping will begin with voracious zeal. This year, I’m content to do some buying on the internet. I admit I’m more inclined to shop small businesses and take a peek at Cyber Monday to snag some deals before I’ll ever consider leaving the safety of my home to fight throngs of frenzied Christmas shoppers at the malls. 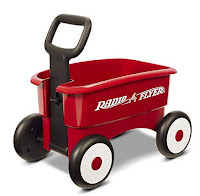 After talking with our grown children, it was unanimously agreed upon that we’d dispense with the tons of present buying this year. I heard a collective sigh of relief reach my ears without using the telephone. Instead, we decided we’d all buy toys for our first grandson in Alaska. Our son and wife in Texas, who are the aunt and uncle, and our youngest son and wife in Alaska with our year-old grandson, decided it would be fun to just Skype and see what little Harvey hauled in for Christmas.

Did you know there are over 4000 results for “toys and games – for children from birth to twenty-four months” on Amazon? They even have a plastic Radio Flyer – My first 2-in-1 Red Wagon. And there are enough pull and push toys to circle the globe if strung end-to-end. Don’t get me started on books. There is over 5000 of them for one-year-old children alone.

My next question is, “Who on this planet buys all these toys?” I’m hoping that parents are taking the time to “spend time” with their children, instead of handing over tin and plastic junk to keep them amused.

I neglected to tell my son when he called the other day that he should save all the big boxes. Kids seem to love the boxes as much as the toys inside them. I’ve even considered sending some empty boxes up to the Last Wilderness. But maybe, I’ll put a set of drums in one of them. Pay back is always fun.

Some Truths About the Pilgrims

For me, Thanksgiving has always been my holiday of choice. It’s a time when families come together to eat, rejoice, and celebrate the holiday without the responsibility, and sometimes burden, of foraging into the crowded commercial world to buy presents.

I like the idea of the Pilgrims gathering together to thank the Almighty for their survival and also to invite and thank the Native Americans of the Wampanoag tribe who were helpful in their endeavor. Unfortunately, what we believe about the Pilgrims isn’t all facts or truth. 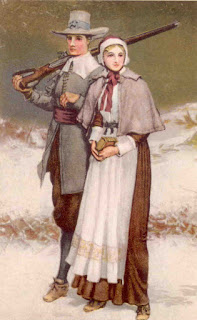 They did not come for religious freedom and liberty. In fact, the Pilgrims were intolerant of other religions and had specific ideas about how to worship God. They were Separatists who thought the church of the Old World was corrupt. When they did decide to set sail for America, after living in the Netherlands for nine years, they were forced to allow strangers to set sail with them because of financial difficulties. These strangers and the strict Pilgrims, although not in favor or fond of each other, banded together to enact the Mayflower Compact, which affirmed in a time of crisis, a monarch’s authority could be set aside, but the consent of the governed never could be. It was a ground-breaking document for future generations.

Neither were the Pilgrims allies with all the Indian tribes in the area. They did make friends with Samoset, a Wampanoag Indian warrior, and later formed an alliance with his chief, Massasoit. Why? The Pilgrims had lost half their population over the winter from sickness, cold, and lack of proper food. In turn, the Wampanoag tribe had lost most of its population to an epidemic brought by European coastal fisherman. Since both groups were vulnerable to attack or domination by other tribes, the Pilgrims and Wampanoags needed each other for protection and the security in numbers. 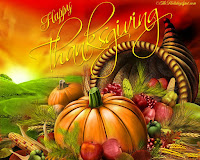 Thanksgiving came about when Tisquantum [Squantum] from the Wampanoags helped the settlers planted corn, squash, and beans, using fish for fertilizer, in the spring. The Pilgrims also built more houses, fished the local waters, and traded with the Native Americans. As fall approached, they gathered to rejoice together after their first successful harvest was completed.

According to old records, there is no mention of inviting the Wampanoags to the feast, but Massasoit appeared with ninety men who bagged five deer to add meat to the meal. They stayed for three days and played games.

When we sit down at our tables this year to eat pumpkin pie, turkey, mashed potatoes, and all the many delicious foods, we need to thank these tenacious forefathers for establishing a colony at Providence Harbor, Massachusetts. And let us also give thanks to Abraham Lincoln who proclaimed Thanksgiving a national holiday for all to enjoy.

Posted by Judy Ann Davis at 10:57 PM No comments: Links to this post