A group of striped skunks have invaded out neighborhood. We noticed them one night as they emerged to eat the seeds dropped from our bird feeders. Earlier, I had seen holes scattered around our yard where they had dug for insects, mushrooms, earthworms, grasshoppers, beetles and grubs. I later found out they eat wasps and honeybees as well.

The striped skunk range covers most of the continental United States from Canada to Mexico. A group of skunks is called a surfeit, and they travel no more than two miles from their dens or from a water source. They have poor eyesight, but excellent hearing and smell. In the wild, they live from 2-4 years and weight 6-10 pounds.
Best known for their black fur coat with a white stripe running up their back, these mammals are nocturnal—active at night—and for the most part, are generally solitary creatures that live and forge alone. However, they are known to hibernate during the coldest months in winter where they gather in communal dens for warmth.
Mating season is one of the only other times when they tend to socialize. The females have litters of one to seven young kits in late April through early June. 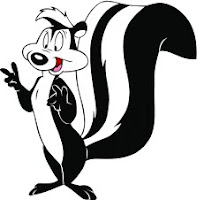 Skilled little diggers? You bet. They are proficient excavators with five clawed toes and can damage foundations when they tunnel underneath a home or a building to take up residence. A burrow can reach three to four feet below ground and six to twenty feet long, ending in round chambers lined with leaves and grass. Our furry Pepe Le Pews dug their burrows under the cement foundation of one of our pole buildings.
Everyone knows skunks are notorious for the foul odor of their spray, but did you know that they are almost predator-free creatures with only the great horned owl as an enemy? Their defense mechanism—their sulfuric spray—is capable of reaching 10 feet and the odor can be detected up to 1.5 miles away.
Although skunks may appear to be cute and furry, they carry many diseases including leptospirosis, canine distemper, canine hepatitis, intestinal roundworm, and rabies.
How do you rid your yard of them?  Professional trappers are the easiest means. To date, five have been removed from our yard and our neighbor’s property.
I’m hoping they will all be removed… and long-lost relatives do not show up for a late summer visit.

Posted by Judy Ann Davis at 8:10 AM 4 comments: Links to this post

It's that time of the year when the tomatoes are ripening faster than we can eat them. This is an ideal time to make salsa. 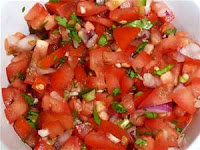 FRESH SALSA
In a bowl, combine all ingredients; mix well. Let stand for about 1 hour. Serve at room temperature. Store in a covered container in the refrigerator. Yield: 3-1/2 cups. You can substitute lime juice instead of vinegar. 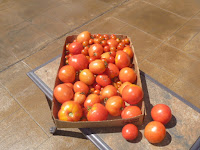 Posted by Judy Ann Davis at 1:25 PM No comments: Links to this post