Step back into the days of the classic Gothic Mystery romances like "The Shivering Sands" by Victoria Holt, "Rebecca” by Daphne du Maurier and “Hunter’s Green” by Phyllis A. Whitney. A new series from authors all over the world features novellas in the style of these old-time stories. Check out the “A World of Gothic” series here:
https://www.facebook.com/AWorldofGothicSeries/ 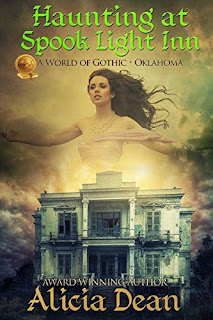 Our Gothic series includes authors from, and stories set in, Scotland, Greece, Ireland, Texas, Florida, France, Louisiana, and Oklahoma, which is where mine is set. My contribution to the series is titled “Haunting at Spook Light Inn” and is based on an actual spook light phenomenon that appears in Northeastern Oklahoma, only a few miles from where my sister and brother-in-law live. To help with researching the book, I took a road trip to the area with my friends, Kathy and Krysta. My sister Ruth drove us out to ‘spook light road.’ We didn’t see the light, (Well, Kathy and I thought we saw it, but we’re not sure. And the two naysayers with us claim we didn’t, so I guess I’ll say we didn’t…), but we had a good time, and it was helpful for getting a feel for my story.

NOTE: Many of the stories, including Haunting at Spook Light Inn, are on sale for only 99 cents each!

Blurb:
Amidst a blizzard, paranormal debunker Camille Burditt arrives at Devil’s Promenade in Oklahoma to research a supernatural 'spook light' phenomenon for her latest book. There she encounters a ghostly being, which she dismisses as a figment of her imagination. But as the apparition becomes too persistent to deny, Camille realizes the woman’s ghost is quite real—and that her demise was not accidental.

Declan Rush—the inhospitable, reclusive owner of the inn where Camille is staying—is linked to the deceased woman, but he is less than forthcoming. Despite his unfriendliness, Camille is oddly drawn to him, even though she suspects his connection to the spirit might be that of killer to victim.

When another suspicious death occurs, Camille intensifies her investigation. She has precious little time to ferret out the truth. Not only is her book deadline looming—she's desperate to discover if the man she’s falling for is a murderer.

Excerpt:
Right at ten p.m., I put on my coat, boots, scarf and gloves then pulled open the front door. I went around back and keyed in the code to the garage door. The door slid open, and I climbed into a golf cart. I headed down the drive, appreciative of the thick plastic that somewhat blocked the wind. Even with the protection, I was chilled by the time I reached the road.
I parked on the shoulder and snuggled into my coat. Above me, ice-coated tree limbs drooped heavily. A howl rose in the distance. I looked around but saw nothing. Of course, coyotes and mountain lions were sneaky. They wouldn’t be parading around in plain view. From what I’d read, they kept mostly away from civilization. Even though this area was hardly what I’d call civilized, it wasn’t the wilderness either. I was certain whatever had made that sound was a safe distance away.
A three-quarter moon hung in the sky surrounded by a spattering of stars. Beautiful. I didn’t see stars like that in Miami. I focused my attention back to the end of the road. From my understanding, the best spot to see the light was just to the left of a cell tower. I could see the red lights of the tower. I studied the area left of it.
In my peripheral vision, a brief glow appeared. I whipped my head around. A translucent, but not quite human form, wafted above the ditch on the side of the road.
I gasped, and a tremble shot up my legs. It’s not real, whatever I’m seeing, it’s not real.
The figure floated toward me. I lifted the plastic, keeping my gaze on the glow.
What was it?
Not the light. It wasn’t in the right spot nor was it the right shape.
I blinked. Still there. Oh God…
I screwed my eyes shut tightly. When I opened them, the glow was gone.

Bio:
Author Alicia Dean began writing stories as a child. At age 10, she wrote her first ever romance (featuring a hero who looked just like Elvis Presley, and who shared the name of Elvis’ character in the movie, Tickle Me), and she still has the tattered, pencil-written copy. Alicia is from Moore, Oklahoma and now lives in Edmond. She has three grown children and a huge network of supportive friends and family. She writes mostly contemporary suspense and paranormal, but has also written in other genres, including a few vintage historicals. She is a freelance editor in addition to being an editor for The Wild Rose Press.
Other than reading and writing, her passions are Elvis Presley, MLB, NFL (she usually works in a mention of one or all three into her stories) and watching (and rewatching) her favorite televisions shows like The Walking Dead, Dexter, Justified, Sons of Anarchy, Haven, Vampire Diaries, and The Originals. Some of her favorite authors are Michael Connelly, Dennis Lehane, Lee Child, Lisa Gardner, Sharon Sala, Jordan Dane, Ridley Pearson, Joseph Finder, and Jonathan Kellerman…to name a few.
Find Alicia here:
Website: http://aliciadean.com/
Blog: http://aliciadean.com/alicias-blog/
Facebook: https://www.facebook.com/Alicia-Dean-559598754221926/
Twitter:  https://twitter.com/Alicia_Dean_
Pinterest: http://www.pinterest.com/aliciamdean/
Goodreads: https://www.goodreads.com/author/show/468339.Alicia_Dean

Sign up for our Novel Notes Newsletter, a multi-author newsletter where we give away a $25 gift card each month: https://www.facebook.com/NovelNotesAuthors