You can’t tell by the weather in rainy cold Central Pennsylvania, but there are signs that spring may be late—but is just around the corner. There are buds on the lilacs, the daffodils and grape hyacinths have bloomed, the lawns are becoming lush, the birds are singing, and the fiddleheads are popping up. You can always depend on the ferns to make you believe that the color green is just about to explode all over the countryside. 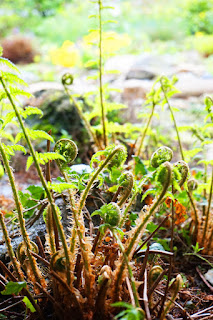 It’s believed the first ferns appeared in fossil records 360 million years ago in the Devonian period, but many of the current species didn’t appear until roughly 145 million years ago in the early Cretaceous period, after flowering plants came to dominate many environments. Throughout history, ferns have been popular in medicine, art, mythology, landscaping, flower design and more.

Ferns do not have seeds or flowers, but reproduce by spores. There are about 12,000 varieties  worldwide, and fern is derived from Old English fear, meaning “fern,” a type of leafy plant. Flower and plant names were popular in the 19th century and the name was first used then.

For various cultures, the fern is thought to symbolize discretion, confidence, fascination, reverie, the secret bond of love, and magic.