autumn is one of the best seasons for baking. Who doesn’t enjoy pumpkin pie heaped with Kool Whip? Or apple pie or crisp? How about pecan pie and the many cobblers?

This month, on October 26th, I’m releasing my last novella in the Musical Christmas Series. It’s Lucy –The Clarinetist, and like the preceding novellas, it includes a recipe that one of the main characters enjoys. This time it’s Andre Almanza who likes apple pie with a cinnamon crumb crust.

Heat oven to 425 degrees. Prepare pastry or use one purchased from the store. (Frozen deep dish varieties work best.)

Stir together sugar, flour, nutmeg, cinnamon, and salt and mix with apples. Turn into pastry-lined pan and dot with butter.

Mix 1 cup flour, ½ cup cold butter, 2 tsp. cinnamon, and ½ cup (packed) brown sugar. Cut dry ingredients into butter with pastry cutter until crumbly. Carefully spread the mixture on the top of the apples, packing it down around the edges.

NOTE: You many need to cover topping with aluminum foil for the last ten minutes to prevent excess browning.  Serve warm with ice cream or whipped cream.

A merry novella for the holiday season!

Lucy Ciaffonni wants nothing more than to start her own public relations firm, but she’s stuck at the local bank performing boring communications and advertising duties. When her best friend and computer guru, Andre Almanza, buys an area farm to create a barn theater, Lucy is pulled into the mystery of discovering where a rare, German, H.F. Kayser clarinet was hidden on the property during Prohibition.

Andre Almanza has always adored Lucy from afar. He hopes she’ll take the position of barn theater manager. When she agrees to help him renovate the barn and update and furnish his huge Victorian house, he is delighted—that is, until the entire town becomes involved in locating the missing antique instrument. To complicate matters, there are ruthless people who want to recover the expensive clarinet and cash in on its legend and value.

Will Lucy and Andre locate the clarinet and finally acknowledge the sparks of romance that have been smoldering between them for the longest time? Will it be the perfect Christmas?

GET YOUR PRE-ORDER AND COPY OF "LUCY ~ THE CLARINETIST HERE! 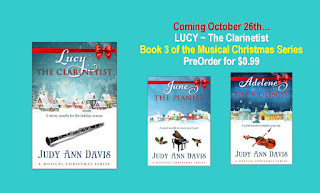